"Dilo Disiq" is an expression in Mauritian Creole which roughly translates to "easy". It was an expression which my friends from Primary School used to describe an easy exam or test. The expression reflects the explanatory spirit of the blog. The logo of the blog is taken from Wikimedia Commons. It is probably a curious fish swimming through sweet water.

The projects on the blog are a way for me to learn new technologies; to learn by making. But it's also a way for me to share data, both historical and contemporary, which are often presented in an inaccessible manner in Mauritius. The blog will also include how-to guides and resources used to make the replication of projects seamless. The projects on Dilo Disiq will be free, redistributable, replicable, interactive and explanatory. 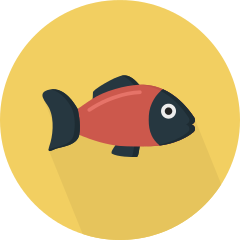 I started using the Internet in the early 2000s. We were still using dial-up modems during those days but the Internet still was fascinating. I always wondered how people created websites and marked their presence on it. I don't remember the exact date but I was still in Primary School when I tried to create my first website using Microsoft FrontPage. I followed the instructions from a French tech magazine but I did not know how to upload the very basic website (which happened to be on Brazilian footballers).

In April 2007, I discovered Blogger and I managed to create my first blog. During those days, I was particularly fascinated by the Google Labs project and the colorful icons of other Google products still give me goosebumps. The adventure continued during Secondary School and I seriously aspired becoming a journalist at some point. I also did Mauritian History as a subject at that time. It was astonishing how many aspects of Mauritian History remained unknown to those who did not study it as a subject. One topic which particularly amazed me during the History classes was the act of capitulation after the British conquest of Isle de France (Mauritius) in 1810. One of the clauses in the act still has an indirect impact on contemporary Mauritius: French is more popular than English even if the island was a British colony before Independence. The challenge was on how to share such knowledge. Avinash Meetoo even wrote a blog post on the issue on his blog. I initially thought of writing History books but there are already good History books written. At that time, I thought of using memes to depict historical events. I did not pursue the idea though.


In 2012, I continued to find new ways of sharing information. I wanted to do something like Xerox PARC which was featured in the movie Pirates of Silicon Valley. The name "Dilo Disiq" came to my mind during those days. After school was over in 2014, I came across D3.js and I tried learning it in order to do projects related to explanatory journalism. But I could not cope as I started an undergraduate course in History and Sociology that year. As I was nearing the completion of my degree, I became more focused on what I want to do in my career. Two fields interested me: 1. Digital Humanities 2. Science and Technology Studies. In June 2017, I joined the Global Startup Labs program organized by the Massachusetts Institute of Technology and Mauritius Telecom. I learned to important lessons which would eventually lead to the materialization of Dilo Disiq: 1. New technologies are not that hard to learn if you remain dedicated and focused. 2. Ship projects in an iterative manner rather than waiting for the 'perfect moment' to happen.

In October 2017, I got a job as trainee copy editor at Thomson Digital. During the last weeks of December 2017, I had some more time and stability. As 2017 was nearing an end, I started translating M.J. Milbert's 'Voyage pittoresque à l'Ile-de-France, au cap de Bonne-Espérance et à l'île de Ténériffe' which I plan to turn into an interactive fiction game.

As a young adult, I feel more mature to work on the projects I aspired to do as a curious teenager. 2018 will hopefully be the year when you would be able to use them on Dilo Disiq. Thank you for playing, reading and sharing them.

The works on Dilo Disiq are licensed under a Creative Commons Attribution-NonCommercial-ShareAlike 4.0 International License. The copyrights of other contents used on the blog belong to their respective authors or creators. 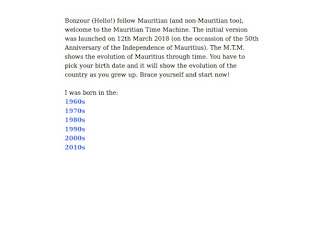 On the occasion of the 50th Anniversary of the Independence of Mauritius, Dilo Disiq is releasing the first version of the Mauritian Time Machine . The M.T.M. shows the evolution of Mauritius through time. You have to pick your birth date and it will show the evolution of the country as you grew up. It is currently in very early stages of creation; most of the features are not present and the content is lacking as well. The future versions will allow you to view the timeline and see what happened as you actually grew up. It will contain more sources, more elaboration and it will include photos as well. Basics Let us now talk on how you can actually replicate it. The current version was made on Twine and the story format being used is Snowman 1.2.4 . You can generate the HTML using the online software and you just have to upload it to a host like Neocities (for free). Before starting, it is good to have a plan though (perhaps on paper). You need to have a start page 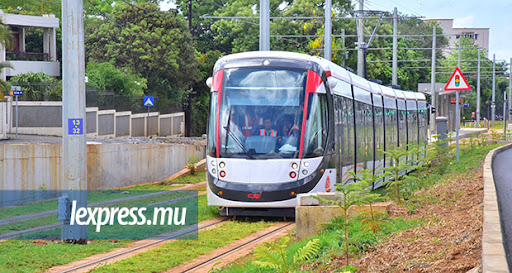